How to research tennis players for profit

It’s been very much a French tennis week for me in these here parts. I showed you last week Lucic-Baroni’s heroics against Madison Keys. If you remember, she won the first set, was 1-5 up in the second set, and lost that 7-6. Well, I had déjà-vu all over again as Lucic-Baroni took on Simona Halep. Baroni won the first set. She was 5-0 up in the second set. I layed her at odds of 1.03 yet again. But she ended up winning the second set too. That is how to create a value bet in the tennis. It may not come off all of the time, but when something like this comes off, you can get a 33/1 return! I have been delighted with my general tennis trading research for members of www.drt.club and for What Really Wins Money readers at www.whatreallywinsmoney.co.uk. Here’s a quick guide on how to quickly research a player… 1) Note the match odds and the 2/0 3-0 set betting odds (in Grand Slams). Here I am researching Annika Beck v Elina Svitolina: 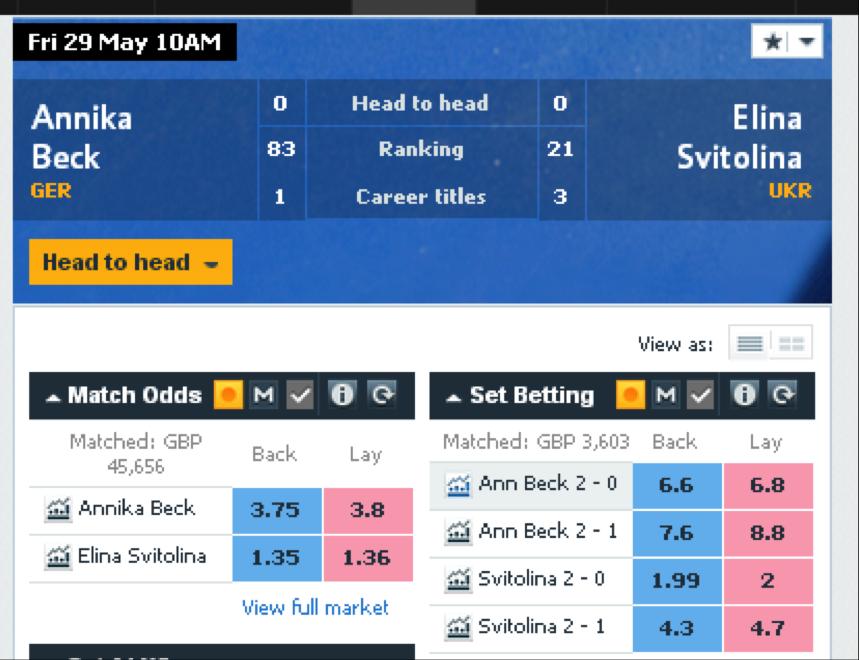 1.35 for the match odds tells us the market leader; 1.99 for her to win 2-0 in sets suggests she may not get a smooth passage today. 2) Note the rankings: 83rd v 21st. I would not be overtly confident in Elina Svitolina based on rankings. Tight rankings do suggest both players will win a set and that knowledge is useful because you can lay the first set winner or lay the favourite to win 2-0 sets. 3) Head to heads: no head to heads here. This can suggest an element of ‘getting to know you’ and is a negative towards the favourite. A step into the unknown… 4) Now we move onto recent form. At www.betfair.com click on ‘head to head’: 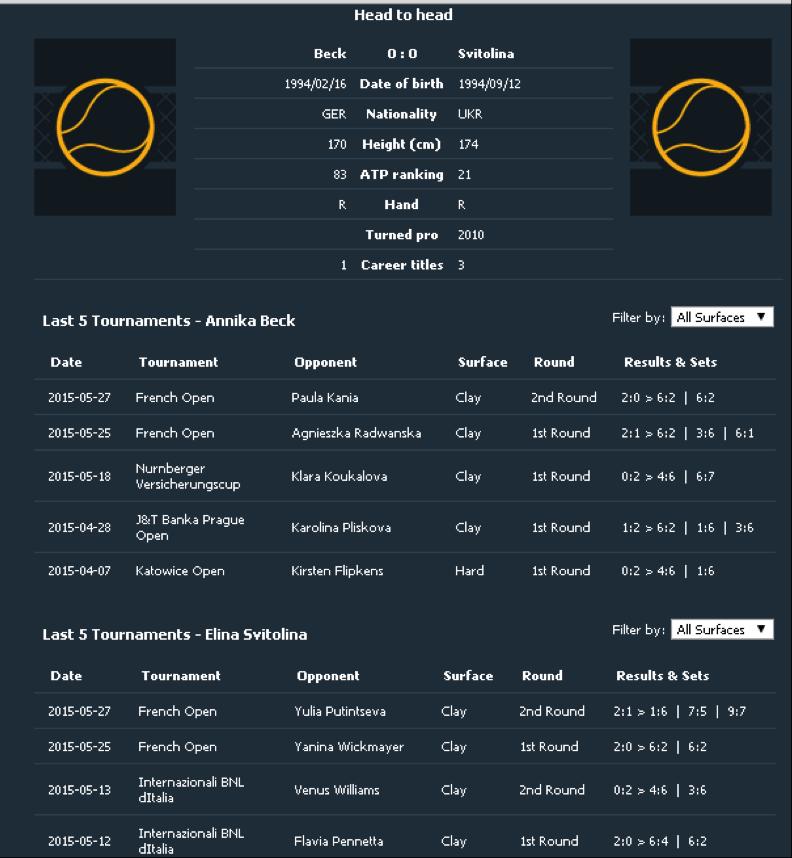 Pay attention to recent form on today’s surface (clay) and in earlier rounds of this tournament.
Make note of:

And that’s all the research I do. Sometimes I go to the ATP or WTA tour websites to check out the head to heads if there is a history. Has the winner won in straight sets? Or in head to heads, do both players consistently win a set at least? Even with these ultra-simple research templates you can get a good tennis trading angle into this match. My conclusions from the above? Svitolina is lucky to be at the French Open. Beck keeps dropping sets so lay her if she wins the first set. In fact, you may like to lay the first set winner. Svitolina is too short at 1.35 odds. Lay her if she breaks first. Her odds will be shorter. I have had a couple of days of very accurate research for the Grand Slams. So if you are a member of www.whatreallywinsmoney.co.uk, you’ll see some research in the Bankers or Blowouts section. Yo! Where my bitches at? I am of course referring to greyhound racing. I have been spending this week following a number of race meetings and am reminded that dog racing can be carnage! There’s bumping here, bumping there, bumping everywhere! This further consolidates my assertion that form-reading and dog racing are not going to go together for me! Favourites consistently under-perform and that is the angle I am taking with a few strategies I am monitoring. I will keep you informed! Curragh-tastic! Checking out my ‘Past Winners’ for you from last week, I mentioned to back the favourite in the 215 Curragh. Well the two favourites came first and second – joint favourites was a pity. In the 245pm race, I advocated an each way on a 6/1–8/1 horse. Well there was only one qualifier which came third for each way money. FA-Cup-tastic! I may miss the FA Cup tomorrow, as I am taking my girlfriend to watch Thailand All Stars v Chelsea. I have warned her that John Terry might try and get off with her, so she has to tread very warily tomorrow. Let’s take a quick look at the FA Cup tomorrow.

So, what are your conclusions for the FA Cup Final tomorrow? Will Arsenal be as efficient as the head to heads and score two goals at least again, as they have done in recent head to heads? Will Aston Villa show the powers of recovery which saw them beat Liverpool 2-1, when 1-0 down? These matches are so hard to fathom. Five 1-0 results in the last seven matches suggests a very tight match. Arsenal went 2-0 down to Hull remember, and came back. I would certainly lay Aston Villa if they score first and I would lay any team 2-0 up. Good luck however you do. I’m off now to make sure John Terry does not take my girlfriend with him to Sydney. Have a great weekend!