How the ‘delay-react-trade’ niche can produce superb value bets 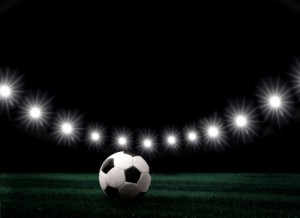 I had to start this article with, ahem, hearty congratulations to Celtic on their 125th anniversary, for their win against Barcelona.

My Betfair account, on the other hand, says quite simply “Feck Off” as Barca were unable on this occasion to redress the deficit.

But there is one footballer who can be relied upon…

Like Ronaldinho, Gervinho and Juninho, I think this Braga player is deserving of an inho at the end of his name.

Cue Alan-inho. It doesn’t quite have the same ring about it.

Alan(inho) scored first again for Braga against Manchester United mid week, only for United to do the inevitable and win 1-3. So, not all enhanced bets will come in such as Barca away at Celtic, but there are enough successful bets such as United’s to counter the odd anomalous result. The Racing Post reported that United were backable at odds as high as 33/1 to win that match!

The reason? Well, it was 1-0 to Braga up until the 80th minute. Delay entry until as late as possible and hope for the impossible! There’s no hard and fast rule. I take it in “time chunks”. Hold on for 5 minutes more. Or wait for a significant time in the game (the 60th minute for instance, or the 70th minute, or 80th minute).

The later you wait, the higher the odds for the team expected to win, and conversely the greater the risk that, with time running out, the team will not get the adequate result. But hey, this is Man Utd who have an unnerving ability to continue playing and fighting until the end.

It just goes to show that this little niche of delay-react-trade can really produce some superb value bets.

As you can probably tell from my continued meanderings on the subject, this kind of delayed approach to football betting is a niche market you should be exploiting for all its worth. I’m working on an alert system which I’d love you to trial in the near future.

I wrote last week about a number of lay ideas that I had regarding horse racing. Apparent 2 horse races could be potentially lucrative for laying the favourite, I argued. This week, I have begun taking note of sellers, claimers and maiden races at All Weather Venues to determine whether these “dodgy” betting mediums can allow us to profit from a wholesale laying of the market leaders. The results take some collating, but I think this approach is worth following.

This joins a long list of lay systems that I am looking into, and the key as I hinted at last week is the staking plan for me.

And there’s one very famous staking plan that you have probably come across in the dim and distant past – it was called the Maria Staking Plan. Here’s a great précis of the staking plan’s background at Sports Trading Life.

I mention it here because I stumbled upon someone who allegedly has figured out the selection system for this staking plan.  And here it is

The trainer’s form was only 1 win from the last 30+ runs.

I thought I’d share it with you. There are some glaring practical issues. For instance are we meant to look at every horse in every race, or specific horses in specific races? The progeny stats are available at Racing Post which is good news.  Here’s a screenshot of the Progeny Stats which are available for free: 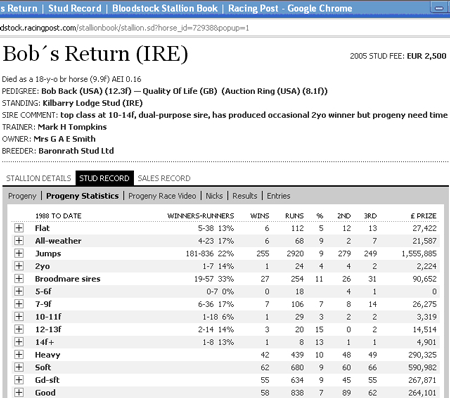 Some of the rules seem very strict and could severely limit the number of horses selected for laying.

My mission, should I choose to accept it (and if Alan(inho) keeps scoring first then I can retire!) is to take the above 6 rules and turn them into some kind of a laying strategy and record my results using the Maria Staking Plan. I will of course report back with my findings in the eletter and at length in What Really Wins Money (you can get a risk free trial by clicking on the link on the right hand side).

Keep at eye out on here  as well for any updates on the above and of course for my weekend football research. I was unable to do research last week because my girlfriend’s birthday was on the Saturday. Fear not, I have told her not to celebrate any more birthdays that fall on a Saturday during the Football Season.

I’m off now to celebrate with Alan(inho) the fact my girlfriend does not have a birthday this weekend.