The major clue for this (besides the system’s apparent familiarity) is that the PDF manual that details the Today’s Winning Selections method mentions Great Leighs as a suitable race track at which to use this system.

And perhaps it would have been – for a nine-month period at least. Great Leighs opened in April 2008 and went into administration in January 2009. It has remained close ever since.

This immediately leads me to suppose that Jonathan Wood has recycled and re-written a system in order to make a quick buck off it.

The price reflects this: just £8.95 – cheap enough to make a lot of sales, and low-price enough for a vast majority of people to decide NOT to bother trying to claim the 60-day unconditional money-back guarantee (via Clickbank).

There’s a scarcity tactic at use too, urging that only 30 copies would be available (despite the fact we all received many emails advertising this product). Only having 30 copies available means that Jonathan would have gone to the trouble of creating and marketing a sales page for the grand total potential earnings of around £270 if he sells all 30 copies.

Then Jonathan – out of the kindness of his heart – offers £100 out of his own pocket to anyone who doesn’t make money from the system in the first two months.

If we take all this at face value, then he’s seriously going to risk being out of pocket!

Then there’s the prerequisite screengrabs that he uses – not just of his bank account with tens of thousands of pounds in, but this: 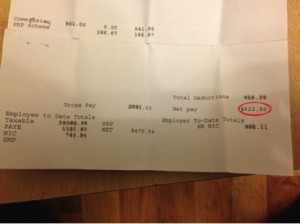 The words that precede this picture are as follows: ‘I earn a lot more than a full time income. Put it this way, I was pulling in a six figure salary every year in my job.’

So, this is proof of him earning six figures?!

Can you see the obvious doctoring of the pay-slip? It’s expertly done and very subtle… I know what you’re thinking: it’s akin to the special effects of films such as Gravity. I’ll give you a clue: it’s none of the numbers that have been (expertly) blurred out – none of the blurry numbers that you can still read beneath the blur. Oh, and there’s a red ring around it. I know you reaaaaaaaaally need to look carefully, but that ‘5’ looks to me as if it’s been added to make ‘622’ into ‘5622’.

See what I mean? No? Must just be my eyes then 😉

Anyway, using Today’s Winning Selections, this ‘veteran punter’ supposedly went from having ‘£12.56 in his betting account to £2,843.01 in just 5 days using this ultimate new system’… and there’s a reported strike-rate of a whopping 93.5%.

The PDF details a system for handicap racing at All Weather tracks. The manual is clear but the system is nothing revolutionary and there is much in there that is out of date. You check the Sporting Life racecards and try and check bookies’ odds at 9.00 a.m., which is usually too early for any odds to be posted.

The advice is for 1-point stakes from an assumed 100-point bank, but the bank size is never defined. It’s a simple and quick form-based, jockey-based selection process.

Day one resulted in the loss of 3.7 points, but we received an email celebrating the first day’s winnings. This is clearly a template email programmed to go out to new subscribers after their first day, and makes the bold assumption that everyone’s first day is a wining one.

After 6 weeks, we recorded 147 runners with 67 of them providing some sort of monetary return to the bank. This 45.6% strike-rate is less than half of the 93% strike-rate blurted out on the sales page.

There was a small profit of 7 points, but it’s a lot of effort for little reward, and we’re not inclined to recommend this product at all. The marketing is verging on insulting and there’s nothing new about the system. Though it might have some merit, it feels rehashed and recycled.